I know that @jesse has thoughts about scripting for later builds of Bike, but as a rough demo of what Bike’s file format already lets us do with standard tools, here are sketches of:

See the attached zip for two versions (standalone and Keyboard Maestro) of each draft script. (Both rough and illustrative, rather than intended for production).

PS, I forgot to say, if you are not using Keyboard Maestro, you should set the following option near the top of the standalone scripts:

if ignoreKeyboardMaestro is set to false then the scripts will look for their options settings in the following Keyboard Maestro variables:

This is really nice!

Even after expanding the above preview of rendered MD I didn’t realize everything it was doing… my my mind thought it was just turning levels into headlines… my eyes missed all the other features, thinking they were inserted by the forum software. Impressive!

(One thing I wondered about this morning is prefacing a branch root with | in Bike, and writing out its descendants as a - possibly nested - multimarkdown table)

I just tried to use the provided script to copy markdown content. However it’s failing with: No clipboard content found for type 'com.hogbaysoftware.bike.xml. I assume some changes in Bike since this script was written, are at fault. I don’t have any internal knowledge about Bike (or this script) so if anyone can help me to get this running, i would be very grateful. Thank you!

I’m in the mountains with a phone but no computer – should be back by the end of this month.

@jessegrosjean may be able to advise if the clipboard bundle id has changed – otherwise I will take a look when I get back.

@complexpoint @skrach The script is working for me on latest Bike, but it requires that you’ve made a text selection. If you just have cursor showing in your frontmost document then I also see that error.

Thanks for testing that – the Save As version defaults to rendering the whole text, I think.

Perhaps when I get back it might be helpful to adjust the Copy As version – to copy the whole text by default if the selection isn’t extended.

Thank you very much @jessegrosjean and @complexpoint. I can confirm that it’s working if text is selected in Bike.

and including JS source text, for use with Script Editor etc, at:

Thanks for these macros!

@complexpoint I have used these Keyboard Maestro macros a lot (Save As and Copy As). It makes it so easy for me to go from Bike to the next state (writing app or mind map). Perfect complement to the Bike app itself. Many many continued thanks.

Thanks ! Very good to hear that. I must schedule a review and update in my diary for later in the summer – not least to absorb Bike’s new inline formatting.

The dialogue box below is the “secret sauce” (for me) of this macro. Depending on the outline, and the subsequent usage, these 2 settings can differ a LOT. It’s fantastic to have this level of control over the MD output. 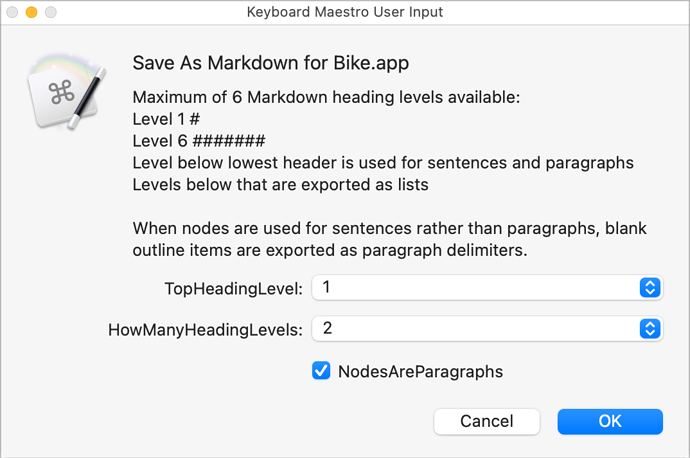 Thank you for these macros! I am trialing Keyboard Maestro and may end up purchasing. Neat tool!

Is there a way to modify the script to Save “Selection” As Markdown? I sometimes end up with several notes in one Bike file, and I’d love to split them out into different files.

Save “Selection” As Markdown?

Possibly – I might take a look next week. The risk, I suppose, is that people might have saved less than they think.

Thanks so much for this, @complexpoint. I had been trying to figure out how to do this with pandoc, and it wasn’t really working out.

@jessegrosjean It would be terrific if something like this could be built into Bike at some stage. The reason these scripts are so useful to me is that they let me rapidly turn an outline in Bike into professional-looking handouts to give to my students or to use in talks. I give several lectures a week and have research and service to do as well, so it’s important for me to be as efficient as possible. I had stopped using Bike to write up lecture notes because of the extra steps required to generate handouts (pandoc doesn’t really do the job, as I still have to do a lot of formatting by hand)—with the extra friction, it’s more efficient to just use Word or Typora.

I agree with a user above that the options that complexpoint provides are crucial to the usefulness of the scripts. In my case, they let me produce something that looks like a professional academic handout almost instantaneously in conjunction with Typora or pandoc/LaTeX. (Top level bullets become headings, one below that becomes paragraphs, one below that becomes bullets.)

Thanks again @complexpoint, and many thanks to @jessegrosjean for building such a useful tool!

Planning to share, at some point in the next few weeks, a more general and flexible pair of scripts, using Pandoc as their engine.

@jessegrosjean It would be terrific if something like this could be built into Bike at some stage.

I hope so. I have a long list of future Bike features, unlikely that I’ll ever get them all done, but “publishing” is one thing on feature this list.