Text Corrections and replacements and substitutions

The big feature that I’m working on for this release is Text Corrections and Replacements. When enabled Bike should now perform autocorrections, smart quotes and dashes, and user text replacements as you type.

Generally it should be familiar to what you are used to from many macOS text areas. Bike uses the same underlying API. With that said I don’t love the standard macOS interactions around text corrections and so Bike’s behavior is familiar, but different.

Please try out what I’ve done and let me know the problems. Might be lots of problems with typing in other languages, I’m not really sure how autocorrect is supposed to work there. Let me know what goes wrong!

Autocorrect runs when you finish a word

Bike autocorrect runs anytime you finish a word while typing text. Previous edits and selections are not considered when determining if autocorrect should run.

This makes autocorrect more predictable. It also means some patterns you may have used to temporarily disable autocorrect will no longer work. For example if you want to avoid an autocorrect in TextEdit you can Left Arrow, then Right Arrow before you finish a word. In Bike that won’t work, since previous selection doesn’t change autocorrect behavior.

Instead of avoiding autocorrects Bike makes them easy to undo. You can undo an autocorrect with a single Delete keystroke, instead of doing the two key Right Arrow, then Left Arrow dance to avoid like in TextEdit.

Autosuggest doesn’t run as you are typing a word

In TextEdit when you are part way through typing a word a popup may show offering a completion for the word. Right now Bike doesn’t do this. That autocomplete feature is useful sometimes, but also makes autocorrect just feel heavy and noisy to me. I think better without. If you don’t know how to spell a word just do you best and in most cases autocorrect should fix after you finish typing the word.

Substitutions run as soon as there is a match

Substitutions (just smart quotes and smart dashes) run immediately as they are typed. For example type -- and it will be replaced by – as soon as you type the second -. This is the same behavior as TextEdit.

One difference is that Bike will underline these cases with the blue autocorrect underline. And you can go back and revert these substations the same way you can for autocorrections. You can also Delete to revert the substitution.

Delete to undo an autocorrection

This is pretty much how TextEdit works, but it seems to have many cases (intentional or bugs I’m not sure) where this doesn’t happen. In Bike anytime the text selection is:

If you change a setting in Bike’s panel then:

For example in TextEdit when you “check next” only spelling and grammar problems are checked. Bike checks all options that you have enabled. So for example if you have smart quotes enabled then check next will also find dumb quotes and suggest you replace them with an educated quote.

I’m not 100% sure on this change. It means you will get more false positives when checking. But it also means that check next/prev will check for everything that you have the text system checking for. I think this approach while maybe more noisy is simpler and more powerful, you can check more things.

In TextEdit under the right circumstances when you finish a sentence grammar errors might get corrected. Bike doesn’t support this because I think those corrections are too hard to spot since they happen somewhere far back in the sentence that you’ve already typed. In Bike autocorrect should only ever happen to the word you just finished typing.

Grammar errors will just be highlighted in green (if yo have grammar checking on) and you can correct them the same (right click, place caret at end, or with checking next/prev commands) as you would spelling errors that aren’t autocorrected.

I would like support for the capitalize words automatically feature. That lets the first letter of a new sentence be capitalized.

This should already be working. At least it is working for me in macOS Ventura. To make it work you do need to make sure that this system setting is checked:

Edit If that doesn’t do it also make sure that you have “Autocorrect” checked in Bike’s Edit > Checking > Show Checking panel.

This version crashes for me whenever I mouse-click in an empty window.

whenever I mouse-click in an empty window.

This version crashes for me whenever I mouse-click in an empty window.

Thanks, I can reproduce the problem and will get a fix in soon.

In macOS Monterey, it is not working.

I have both the system settings checked and the Show Checking panel checked.

In macOS Monterey, it is not working.

I just tested on Monterey and I got it working there too.

For you are any of the autocorrect, text replacement, text substitution features working? For example will smart dashes work?

I did notice that by default Bike’s settings didn’t match system settings. So you need to go into Bike’s check panel and check all the options that you want. Here’s what my system and Bike preferences look like to get it working on Monterey. 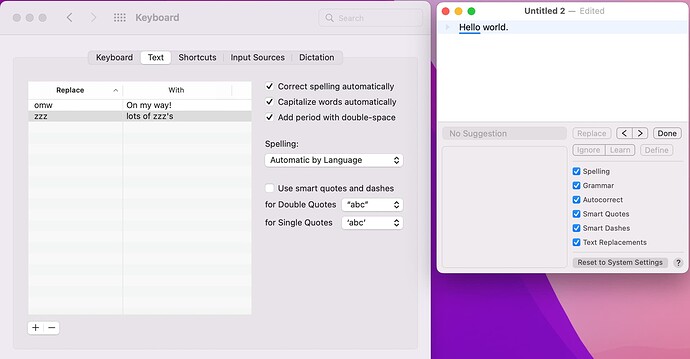 First glance feels great! I love the look and feel and functionality of the blue and red lines. I love that the blue lines disappear after moving on to the next sentence, and I love that if I select some text, a light blue lines reappear. Really well thought out.

Same question for smart quotes. Now I am checking only for " and ', does smart quotes smarten up any other sequences?

It was my screwup. I did not have Spelling checked in the Bike’s checking panel. My bad.

Great to hear! I think I can clear things for future by disabling autocorrect checkbox in case when spelling isn’t selected.

I used it all day yesterday and it worked beautifully. I love the refinements of how the different elements work, especially the persistent autocorrect underlines for the whole sentence, the collection of all auto-correct related options in the Checking panel, and how Bike handles default settings. Really nice!

Any good sources or links for finding out what those are,
and how we might test them ?

Ha, not really! Or not exactly as implemented.

The background as I understand it is that before we had selection ranges in graphical text editors we had point and mark in console based text editors. So to do something with a range of text you needed to set the mark, position the point, and then perform the command.

And in same text editors people wanted to undo or move text, and they did that by putting deleted text into the kill ring, and if you wanted to get it back you would use yank commands.

From that history a very specific implementation of these ideas exists in the cocoa’s text system, not well documented. I think the primary reason why you might uses (and why I bothered adding to Bike) is because these are convenient (or at least common) features to use when building custom keybindings.

For example save the XML at the end of this post to this path:

Then restart TextEdit and Bike and then:

And the selected text will be wrapped in ().

To make it all work it’s important that Bike’s commands have the exact same behavior as TextEdits. So most of the work was trying to understand and copy the not well documented default behavior.

Perhaps, looking at your plist code, ^a ?

(that seems to work here)

The extension I need here seems to be .plist

Given that change of path, and using ^a, it works well …

(In both Bike and TextEdit)

Perhaps, looking at your plist code, ^a ?

The extension I need here seems to be .plist

Odd, for me .dict does seem to be working. Though plist is probably more appropriate. I’ll change that above too.

Yeah, I never knew Macs custom keybindings could do multiple commands in a single binding. Also didn’t know they could recognize sequences over time.

This might be of interest to you. KeyBindings - BrettTerpstra.com

I find this behavior to be quite problematic:

Instead of avoiding autocorrects Bike makes them easy to undo. You can undo an autocorrect with a single Delete keystroke, instead of doing the two key Right Arrow, then Left Arrow dance to avoid like in TextEdit.

…it means that typing the space character after any word will trigger autocorrect. If I hit Delete then, it’s unclear what I actually mean – do I want to cancel autocorrection? Or do I want to remove the space character because I’ve forgotten to place a comma after the last word? Of course, instead of using Delete I could use the Left arrow key to move the cursor, insert the missing comma, then go back with Right arrow key – but that’s not what most people I know would do, myself included. I doubt I can retrain my brain just for one app.

This gets even worse if - as in my case - most of autocorrect results are expected which means that in most cases I really do want to delete the last character and not cancel autocorrecting.