I REALLY want to use TaskPaper for GTD. Tried everything I I just am a plain old lists person. But keeping track of everything means interfacing with email as 90% of my tasks come in via email. I found the mail.app macro to get messages to TaskPaper, but I can find no Outlook macros. No skill or time to learn how to write a script to do this–does anyone have an Outlook script that will send a message to TaskPaper InBox with a link back to original message in outlook?

I’ll sketch something this (EU) evening.

In the meanwhile, to activate links of the form outlook://2040 for clicking in TaskPaper, you will need to:

( It isn’t code signed, so you may have to refer to this:

but the source code is simple and visible )

I have made an edit to the Send selected email(s) to TaskPaper 3 script here:

Very preliminary sketch here, just writing things straight to an Inbox: project. Not sure if the sequence of parts is right yet (sender, received, link, etc) My guess is that if you select several things from the same correspondent, mixed in with other stuff, the Inbox should probably show things grouped by sender ? On help with which projects they go to next, I think it'll probably be more sensible for me to write a separate script for generally selecting TaskPaper items, throwing up a menu …

so that it can be used (if you adjust the options at the bottom of the script) with Outlook 2016.

and to make it read the active selection in Outlook 2016 (rather than Apple Mail), you should edit it to:

I’ve also put a Keyboard Maestro version, which shouldn’t require configuration (it detects whether the front application is Mail or Outlook 2016) here: 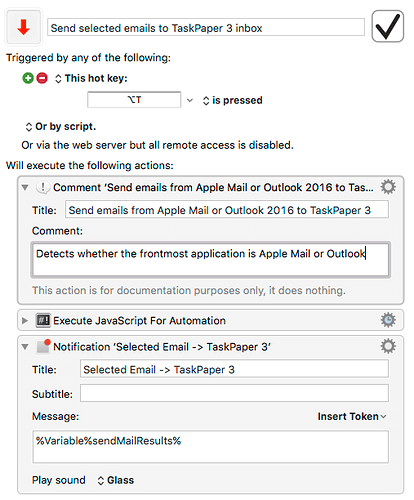 Sends the selected emails, from Apple Mail or Outlook 2016, to an Inbox project in the active TaskPaper 3 document. To enable outlook:// links from TaskPaper back to the message in Outlook 2016, you will need to: Download the zip of this Github...

Thank you for sharing this.

Thanks for creating this…almost 2021 and it still works like a charm!