In Finder when I press the spacebar / Command + Y I do not get a preview of a selected Bike document. The message provided by Finder:

The extension com.apple.tips.TipsAppQuicklook-macOS does not implement file previews. 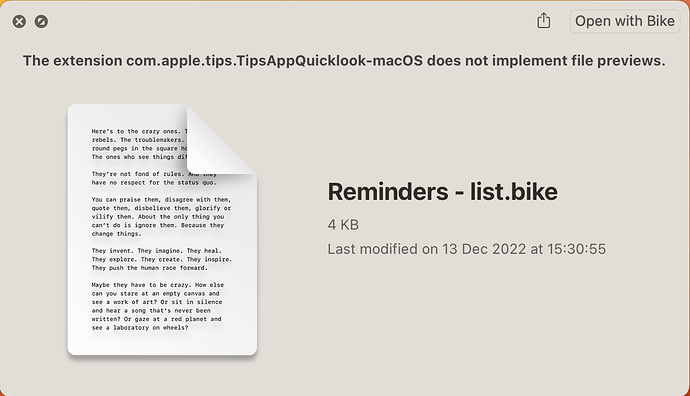 Is it possible to use Quicklook with Bike files?

Bike .bike files are really .html files with a different file extension. Unfortunately QuickLook doesn’t seem to understand this and so doesn’t generate previews. Eventually I need to figure out the problem, or maybe generate my own previews, but that’s low priority at the moment.

In the meantime you can get previews if you:

Thank you for the response.

As you most probably aware, Bike files (without changing the .bike extension) preview in Marked and also if within DevonThink.

Be careful, though, not to edit them in DEVONthink, which, by default, changes not only their file extension but also their internal format, leaving them unreadable to Bike.