I’ve long tried to build apps with “minimal UI”. Don’t show a control if it’s not absolutely necessary. And if some UI is necessary show the minimal amount possible. But this has a cost, because sometimes you need to turn those UI knobs!

I still like the minimal aesthetic, but I dislike hard to use UI.

A few examples were I see a conflict:

So what to do?

With Bike I’m coming to a new approach. Show lots of UI and use Escape as a universal way to close out that UI and bring you back to your content. I started thinking about this with Bike’s Find and Replace panel. From 1.) above… should I have one command for Find and another for Find & Replace, or just a single Find & Replace command. I decided on one command.

The text checking panel design this week has made this more clear. Initially I spent a lot of time trying to figure out which controls I really needed and which I could remove. In the end I kept them all, and in the future I plan to add more. For example once I implement “Check while typing” I’ll put that checkbox in the same panel. I also plan to put more options in the panel post 1.0.

The point being when I’m “Finding” or when I’m “Checking” I want to see all the controls. The full interface for the task. How does that not turn into a mess:

I think with this approach Bike can keep getting lots of UI controls, but in a manageable way. At least I hope so! 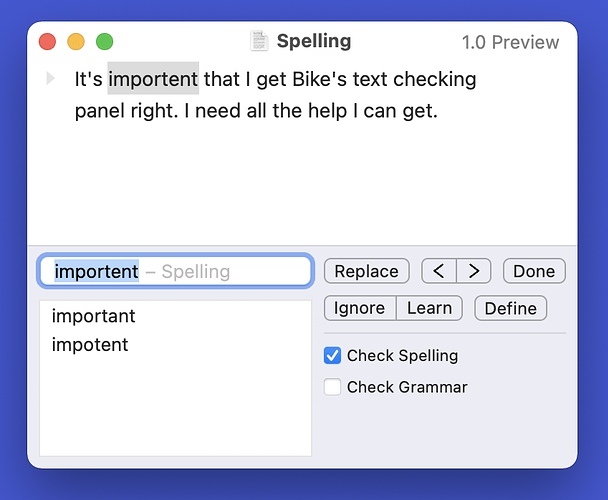 In the above screenshot, how do you select the replacement word using only the keyboard?

Will I be able to change the height of the panel?

You should be able to try out now in latest beta release.

Generally the operation is:

For some reason, they weren’t working for me before.

But now, they work properly.