What is the difference between TaskPaper Preview and normal TaskPaper?

There are two versions of TaskPaper that you can try:

Normal TaskPaper version are the “official” ones. TaskPaper previews give you early access to work in progress (sometimes known as bugs, other times know as cool features). You’ll know that you are using a preview release because the application icon in the dock has “Prev” over it.

Anytime I do a build I actually build both versions. So they both have the same version number and code, just some some different config. So at times the most recent preview will match the most recent standard release. Then going forward the preview release will get some updates and again one of those updates (that’s hopefully working well) is selected to be the new standard release.

But there is no “Prev” on top of the icon in the dock?

But there is no “Prev” on top of the icon in the dock?

The “Prev” should only show up when you area running the app. It should look like this: 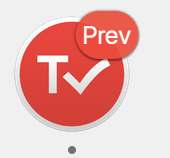 Does it show for you now?

It Does! Sorry about that

So everything is in order, I have the full version I expected, and I’m running the early releases of the app.
I could simply download the regular version and run that one if I ever worried about stability, right?

I could simply download the regular version and run that one if I ever worried about stability, right?